skip to main | skip to sidebar

Well Dad has picked a good week to go back-packing! Weather has been great for late September. Dad and Bob headed off on the train on Monday to Aberdovey. They then walked along the beach to Twywn and headed inland 4 miles to the campsite which was next to a steam railway. Monday nights menu was fit for a king ... cup-a-soup, noodles with a sprinkling of mature cheddar cheese and the final touch - a sachet of tomato ketchup which Dad had picked up from a cafe earlier in the day.

Spoke to Dad earlier today and they were just below the summit of Cadair Idris. They were just having lunch. Dad's usual of cheese and onion sandwiches! Great weather, great views. Apparently yesterday they found a nice spot for lunch but it was a bit whiffy. At first they thought Dad's mature cheddar had matured a bit too much. Only turned out that were sharing their picnic spot with a dead sheep !

Tonight they are camping (somewhere with no mobile phone signal!) and then they will be heading back home tomorrow.
Posted by Kendie at 10:00 PM No comments:

Had a great day yesterday out with Dad and Andy "chasing" the Tour of Britain around Stoke-on-Trent. Initially we headed down to Trentham for the start. It was great to wander around the support vehicles and team coaches looking at the bikes and catching a glimpse of the riders.

We watched them roll-out of Trentham and then after we picked up a quick coffee "to go" we headed over to Gun Hill. After last year we decided this time to leave the car at the bottom and walk up. It wasn't too bad a walk up and we had plenty of time. We found our spot on a the windy top of Gun Hill and waited for the riders to come over. 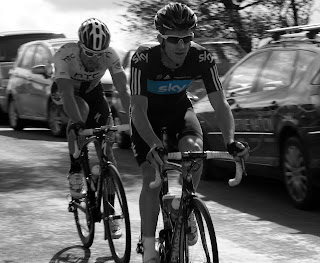 Once the race and all the support vehicles had come over Gun Hill we headed back down and jumped in the car to head up to Hanley to catch the end. Dad took the "scenic" route back and I was giving him updates roughly where the race was from Twitter updates. Dad was confident we'd make it back to Hanley with plenty of time. As we were heading up Holden Bridge I told Dad that the leaders had only 5km to go .... it was then a made dash up to Hanley. Dad dropped me and Andy off on Town Road while he went park the car and we legged it across Hanley. We could see the helicopter and as we got closer we could hear the commentator. Just as we rounded the corner we heard that the leading group had already crossed the line!  However we did manage to catch the rest of the peloton and the stragglers at the back.  The stage was won by Lars Boom of Rabobank.

I waited around and watched the podium presentations, had a photo taken with Dean Downing and then had to go in search of Dad. Eventually found him sitting outside Go Outdoors !

A great days racing around Stoke-on-Trent.
Posted by Kendie at 7:56 PM No comments:

My Dad is like a boomerang ... I post he's off on his travels and then forget to post when he's back. Anyway he does come back !

Delemere Forest was a bit wet. In fact one night the tent resembled an Ark as it was surrounded my water ! It wasn't raining in from the top but lapping up over the door ! Anyway after a bit of drying out the following day they were fine.

Dad went off in search of and eventually found the Eureka Cafe - or as he likes to call it Ikea!  I was starting to get worried when he said he'd had breakfast in Ikea as I had visions of him cycling along the M62. It wouldn't be the first time he'd got escorted off the motorway.

He also found a boat museum which he thought was on Manchester ship canal. It was in fact the Shropshire Union canal!

It wasn't the driest of weekends ... but what did he expect for a Bank Holiday weekend !
Posted by Kendie at 7:23 PM No comments: